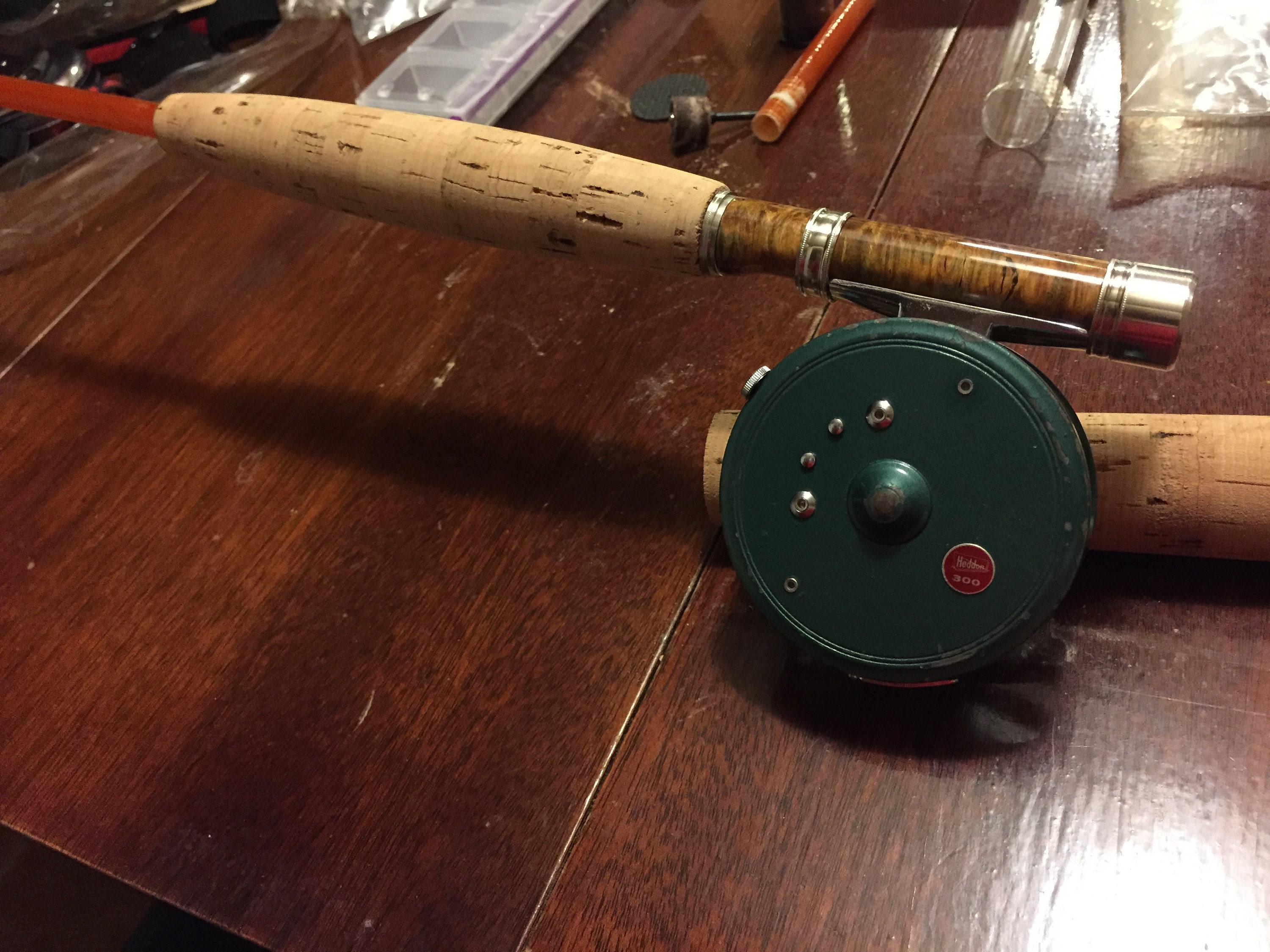 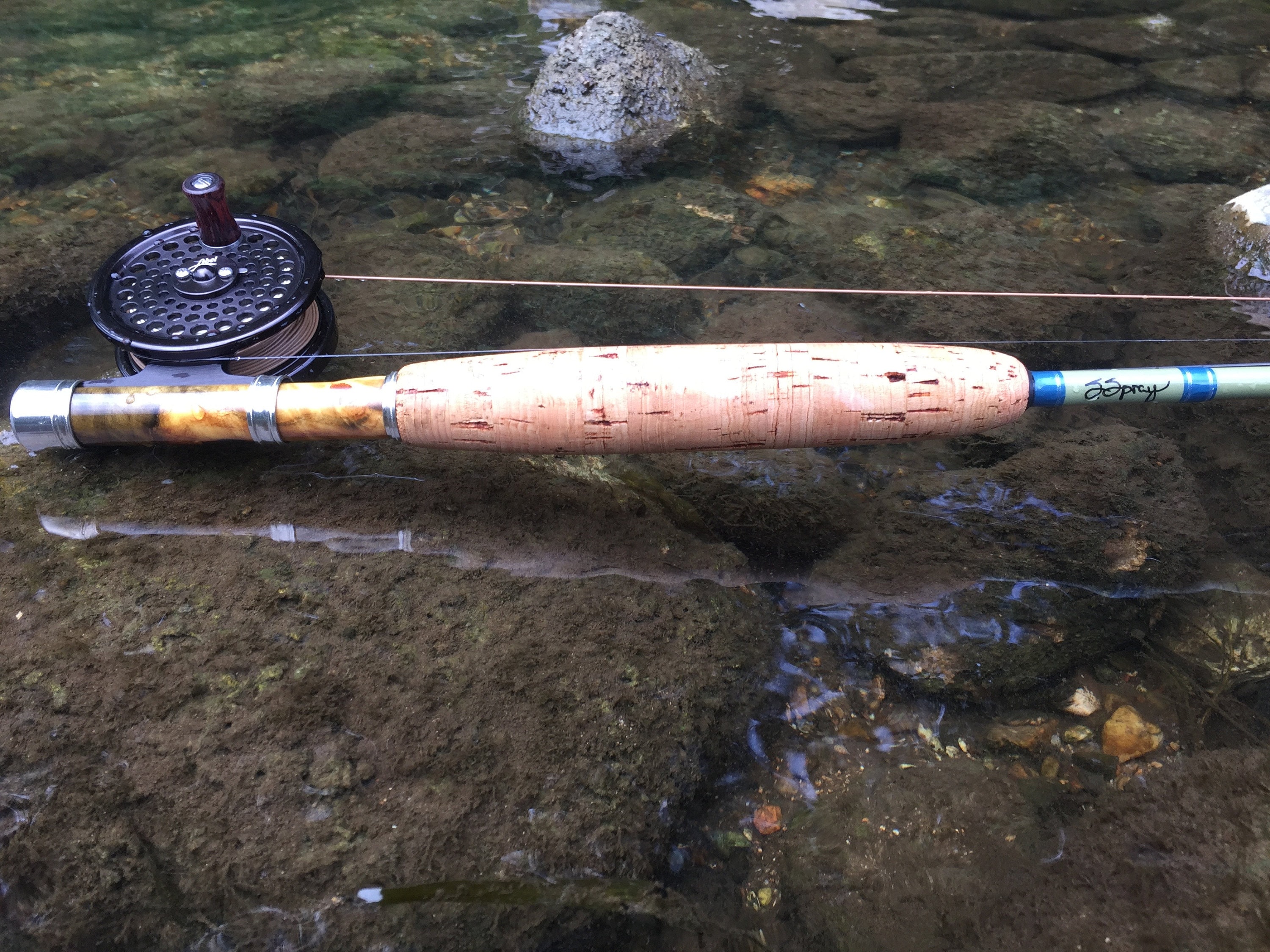 First, we must define the two words. “Click” is just referring to the sound that the reel makes. Pawl is a small, normally triangular piece of metal that engages a toothed wheel or gear to either create drag or a transfer of force to move a gear. Keep in mind that there are drag systems sold as click-pawl that do not fit this definition.

The most common example of a pawl drive on a toothed gear is a rear wheel of a bicycle. Think about the last time you rode a bike, that clicking sound when you were coasting was the pawls passing over the teeth of the internal rear drive gear. When you peddled forward the pawls engage the teeth on the gear which applied the force of the peddles and chain to the rear wheel. Normally this system is made up of several pawls and a multi tooth gear. Enough about bicycles let’s talk about why you clicked on this page.

A click-pawl reel is basically the same set up, with the function of the pawl and a toothed gear acting as a drag system not a drive system. As the line is stripped out the pawl moves over each tooth on the gear mounted on the spool of the reel creating the distinct “click” sound, hence the name “click-pawl”. This movement over the gear creates a small amount of drag. Some of the click-pawl drags are adjustable by increasing the pressure on the spring retention system with an adjustable external screw system, others may have two pawls so that the reel can be reversed from right hand to left hand or vis-versa.

Below you can see a couple of the basic styles of click-pawl drag systems and how they work. The variations of the click-pawl system are too numerous to cover on this platform, even today manufactures are designing new versions of the pawl system. 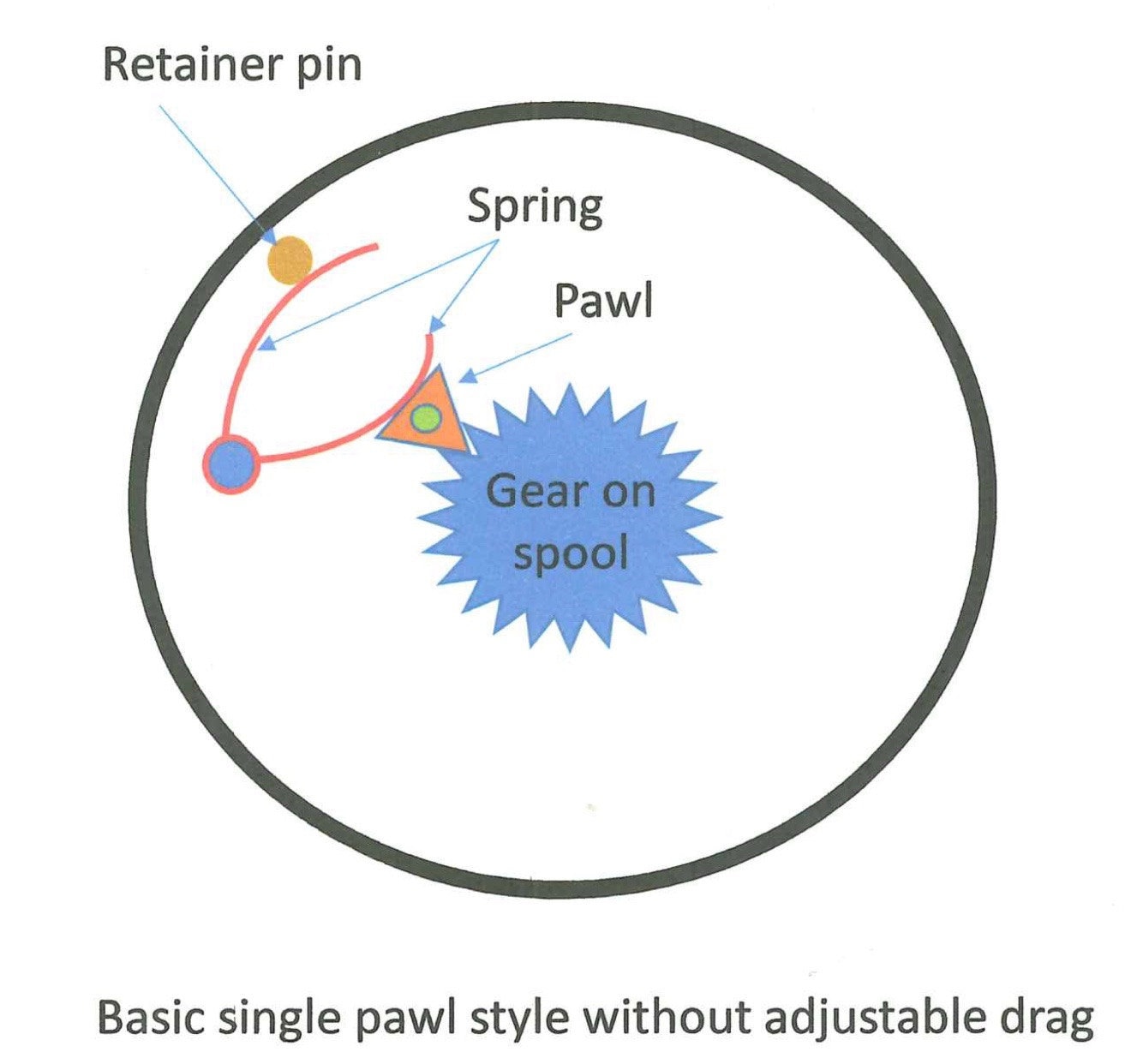 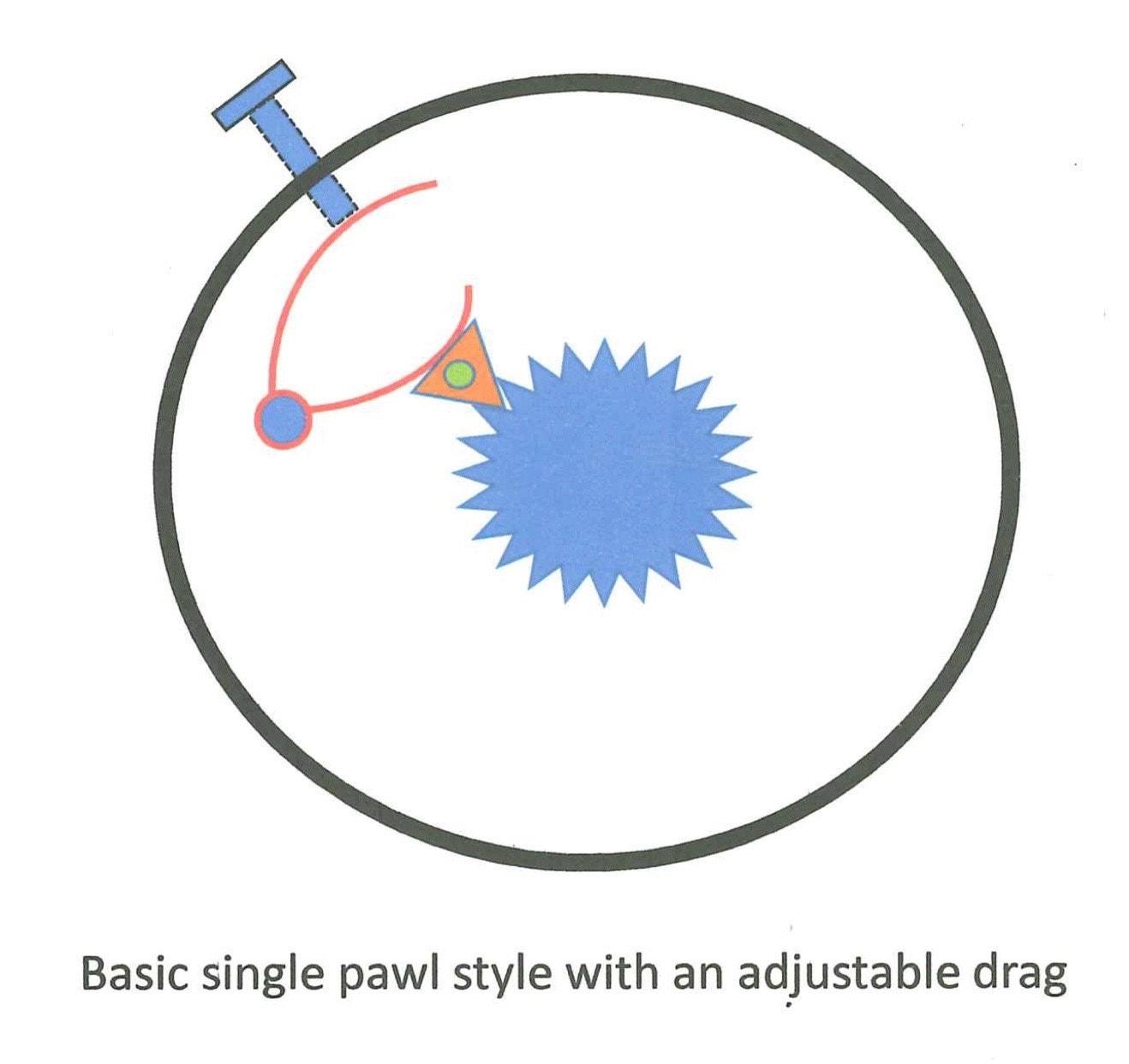 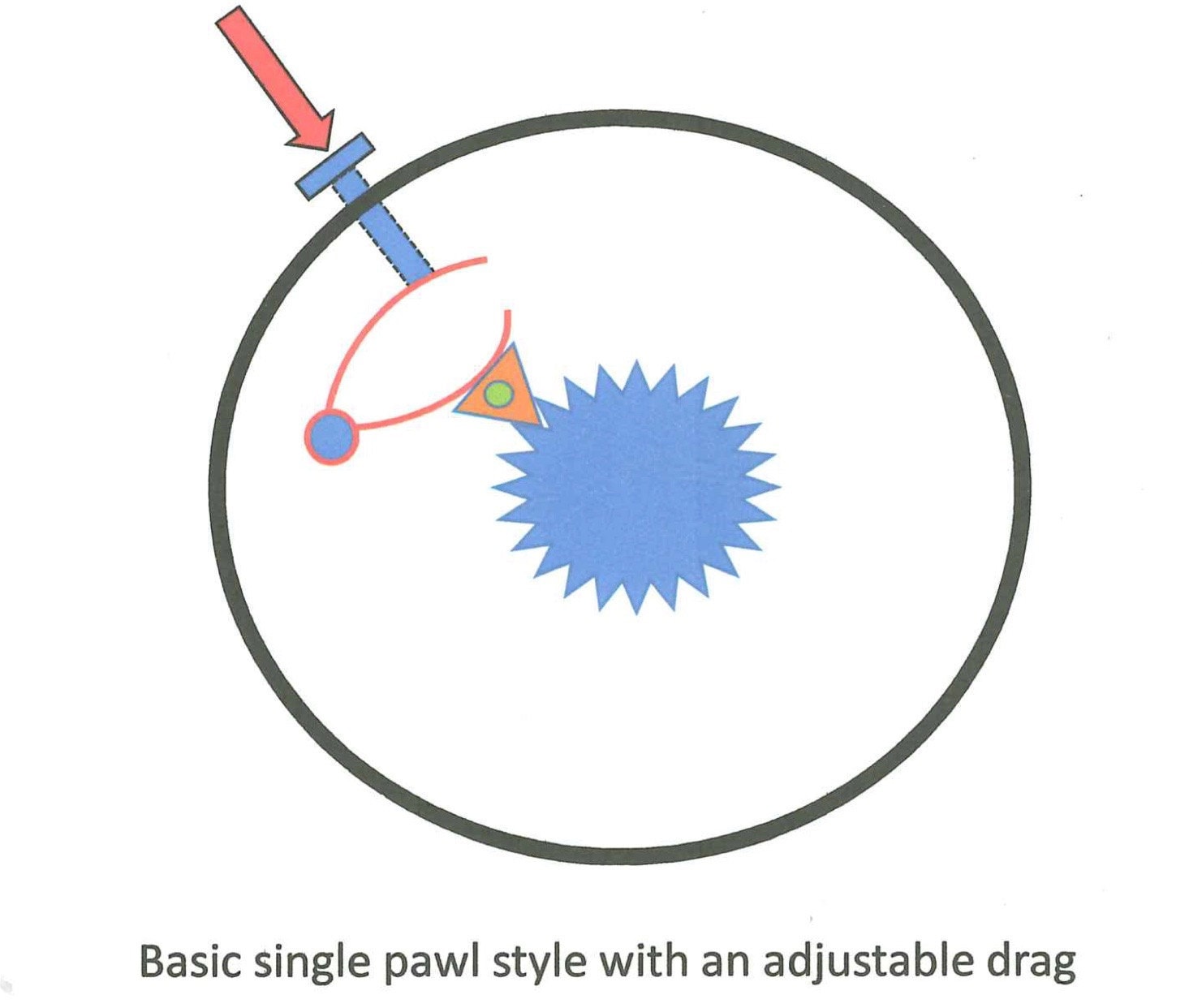 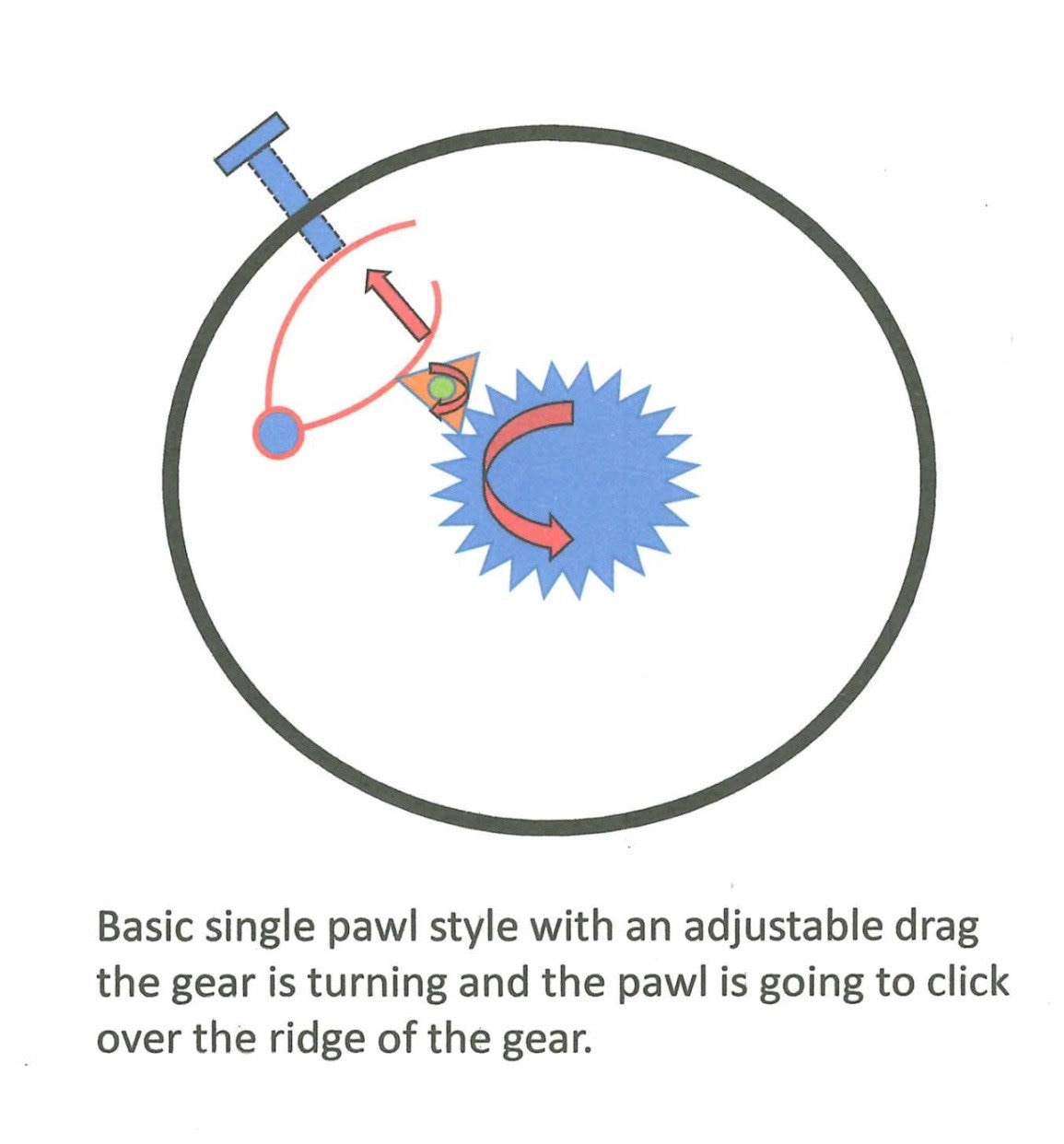 Even though click-pawl systems are still being made and new versions being developed, click-pawl reels are largely considered to be a “vintage” style of drag system. So why choose this style of reel over newer technology, like a conical drag or the tried and true cork friction drag systems. Really it comes down to the sound and look of the reel. If you have ever held a Hardy click-pawl reel in your hand the beauty is that of a classic painting, if you look close enough you can almost see the smirk of the Mona Lisa in the inside mechanism of the reel frame. Then mount that piece of art on a fly rod and hook a fish big enough to pull line from the reel, the sound is like a chaotic symphony of classically trained kazoo musicians. It just comes down to a cool factor, they look cool, sound cool and at times are cool on your wallet.

To truly appreciate the love of the click-pawl system you must do it in person, you don’t have to drop a mint on a vintage Hardy reel either. Copycat companies all but robbed the design of the Hardy and produced it under their own name, most are nice reels but not the same quality as the Hardy and it mostly will show in the weight of the reel. Versions such as the Heddon Daisy 300 series, Berkley 500 series or even Eagle Claw who all made clones to the Hardy Lightweight series reels can be had on Ebay for a song. Parts are mostly interchangeable between the comparable sizes, but you may find some operational issues if you put an Eagle Claw spool on a Heddon frame. Even though I did just that and the spool operates fine I have heard stories of swaps that resulted in spools falling off or pawls not fully engaging.

Click-pawl reels are amazing and find a place on my fly rod but on a limited basis. I have reels of all different makes and styles and each is fitting to its specific job. Look at a click-pawl reel for a lightweight rod to start, pair it up with a 3 or 4 weight or smaller rod and do most of your fighting with line control, once you learn how to work the rod and reel start putting fish on the reel for the fight and listen to the beautiful music that is a click-pawl reel. Thank you for reading this blog post. Stop back for more in the future.

Previous Post Warm water on the fly
Next Post Replacing a damaged foam fly rod handle without removing the reel seat or guides.
0 items in your cart