Warm water on the fly 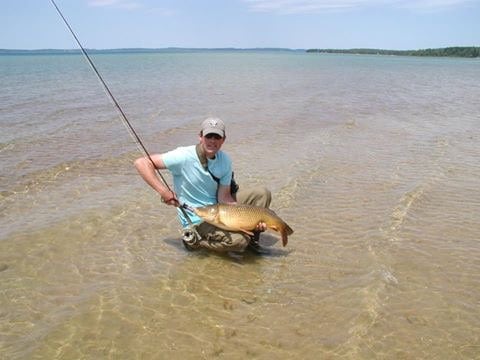 Trout are awesome, but...

The definition of a fly fisherman is changing. The sport is not what it was when I started years ago, it is better in so many ways. Joan Wolfe has paved the path for many women, straight-billed-trucker-cap-wearing youngsters reside between the magazine pages directed at the fly fishing industry. Most noticeably the words “game fish” are taking on a whole new meaning.

Almost fifteen years ago I watched a segment about fly fishing for carp on a local PBS program. The next weekend I was sight casting to carp. From the first tightening of the line, I have been addicted to the “Golden Bone”. A wave inducing, fly crushing, adrenaline surging, charge to take your leach pattern from ten feet away is something that I can’t seem to shake from my blood. 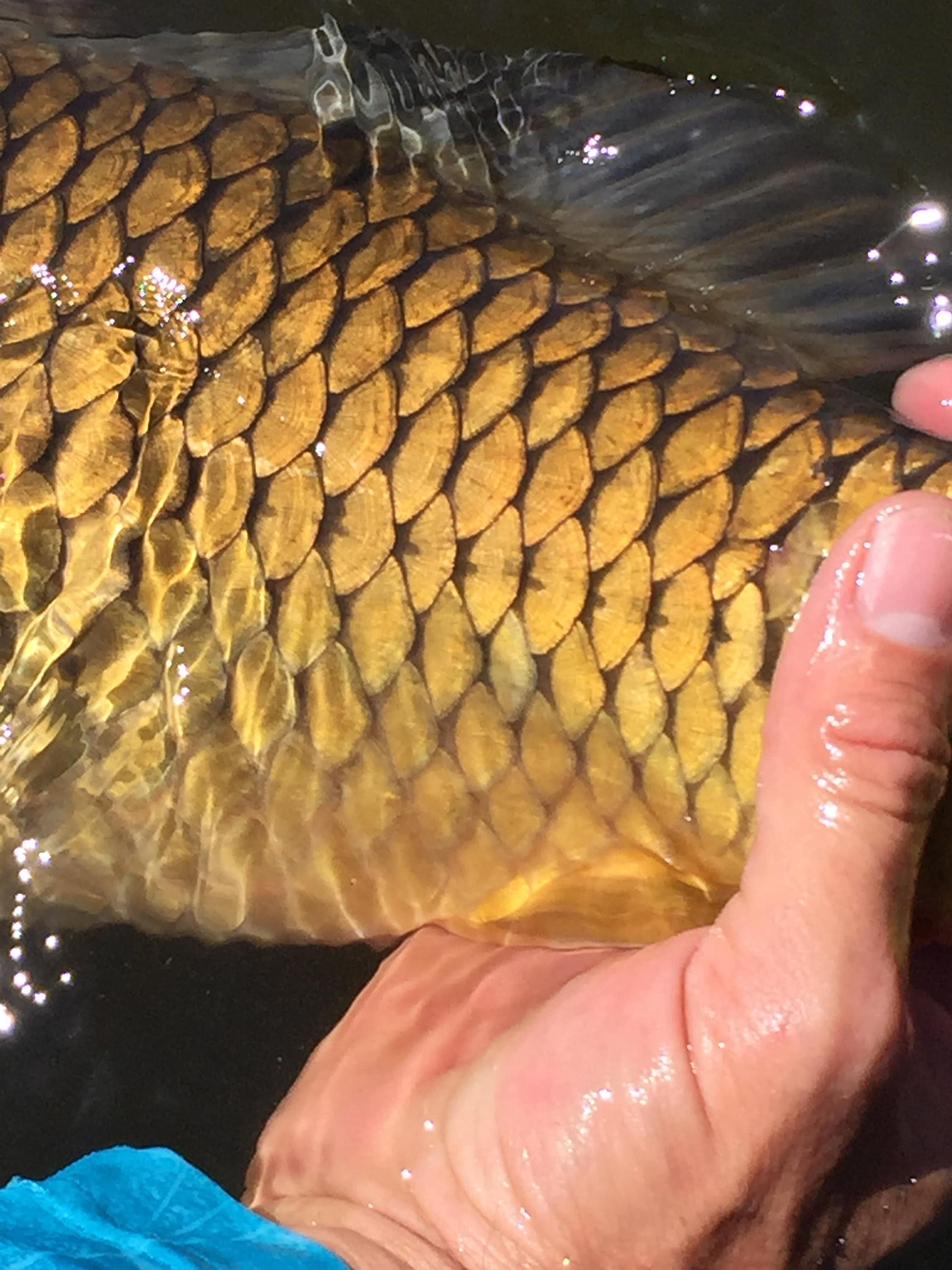 It all starts with a shadow or maybe a mud cloud. After moving the boat or wading into position you can see the direction that the fish is moving. Maybe it spooks and takes three other feeding fish with it. Maybe you actually get a chance to make a cast. As you strip line out, you watch the carp pulling mouths full of silty sand from the bottom. False casts are sequential and low to prevent the carp from spooking from the shadow or your movement. You do your best to predict where that fish is going to be in the next thirty seconds. The Fox Fur Clouser, tied on to your five pound test, drops to the water as if it were a heavy cottonwood seed. Once it sinks to the bottom, a short six inch strip creates a small puff of silty sand. You have the attention of a nineteen pound minnow with a gnarly tail fin from a decade or more of rooting on the bottom. With one flick of that massive weathered tail it is upon your fly. Pectoral fins flutter to adjust its body to tilt, like the head of a curious dog, just enough for it to eye your offering. With a flare of its gill plate your fly is in its rubbery mouth, you count “one Mississippi” and give the line a strip set.

If everything works out perfectly you will have a fight on your hands that will not be forgotten. Head down and charging to deep water; It is like you hooked a passing submarine and they went full steam ahead. “Try and stop me” it says. Hopefully you brought the right gear for a quick fight and release. If not, it’s just a trash fish… right? In certain ways, yes. There are plenty of carp for sure, and they do have some minor down sides as far as affecting their ecosystem. Ask any fly shop or guide in the Traverse City Michigan area and they will tell you that they have a positive impact on the economy. Fifteen years after piercing my first rubbery lip with a fly, I have seen the shift in the perception of this game fish. I have watched the transition go from “bonk em on the head and leave them on the shore” to skilled anglers using the hashtag #keepemwet and planning week-long, destination fishing trips around sight fishing these beasts. Even companies that are synonymous with trout fishing have complete pages on their websites dedicated to the carp and fly fishing for it. Over the years I have been many places with a fly rod in hand that I seemed out of place. Questioned as to “What in the world would you be fishing with a fly rod here?” or the bewildered look on the faces of lake residents when they shout from their dock “Doing any good?” and I reply “just looking for carp”. It has been kind of fun to watch the doubt on their faces turn into amazement when the rod doubles over after being lucky enough to hook one shortly after being asked one of those questions. It feels like I have been the star of my own show at times.

Many books, articles, blogs and videos have been written on how to find and catch carp. It is quite simple and differs very little from any other sort of fishing. Are they eating? If so, then what are they eating? Most commonly leaches larva, minnows, crayfish, seeds and water foliage. There is no single code that can be used to catch every carp you see. Some may not even look at your fly.

If you see one laying on the surface of the water in the sun, good luck. They are simply sunning, very few of these fish will take a fly, even expertly delivered to the front door.

Groups of several “cruising” fish are another tough category to catch. They are easier to catch than a sunning carp, but still very difficult. A skilled cast and the proper fly selection may entice this fish to feed but it is unlikely. Single cruisers are more likely to take a fly than groups of cruisers.

Fish feeding on the surface can be caught, with the proper fly selection, although sporadically. What they bite really doesn't necessarily depend on what they are feeding on right then. It really depends on what they eat on the surface most often. I have fished where people throw bread for carp to feast on regularly. A bread style fly will be devoured in this setting. A friend and I caught so many fish out of an area like this that we actually started to tie the ugliest flies we could. Imitating everything from, bread to dog food to just a clump of fur, because we knew that they would put just about anything in their mouths. It was almost a challenge to see if we could get them to take the ugliest fly of the day.

Fish with their head down and “rooting” the bottom are your best chance of a hookup. Cast a few feet in front and beyond the head of the fish and your chances are pretty good that your fly will be at least looked at.

I didn't set out to write a “how to” but more of a “must try”, and I don't mean get out and try to catch a carp. Make it your goal this season to cast to something different, something out of your comfort zone. Share what you have learned with others. Hand the struggling new guy on your favorite stretch of water a few productive flies. That is what happened to me. Infect others with your knowledge, along with that infect them with your sense of conservation. This kind of  camaraderie is how I got started and why I am still flinging flies years later.

Disrespect has flourished on our waterways in recent years. I am sure if I could collect all of the returnable cans and bottles from the Mighty Mo I could pay for a new drift boat several times over. The people that are using the water beside us could be the next generation of fly fisherman or the friend of a friend on social media that happens to see your post about your new adventure.

Shortening attention spans, new experiences and variety are the life blood of many of the next generation of conservationist. Accepting and encouraging those new adventurers is going to have to be the future of fishing, and conservation. Clean fishable water doesn't start with pristine cold water fisheries. It starts where the fisherman of tomorrow are introduced to the sport, Snoopy fishing pole in hand bobber fishing for Bluegill. As a kid I had no care if I deep hooked a fish, as an adult I have had sleepless nights because of that one brown that I hooked square on the tongue while fishing smallmouth. Some fly fishing shops offer a discount if you bring in a sandwich bag of river trash, programs like this are promoting change in the habits of many, or at least encouraging the ones that already care to deposit the trash they already pick up, into his trash can. It’s an effort, if we teach good habits from the beginning, encouraging our future fisherman to respect the waters and the fish that inhabit them, they will respect any water they recreate on. I am going to step out of my comfort zone this season… will you?

If you made it this far thank you for reading my first blog post. Check out the Traditional Outdoors Podcast where we cover this subject in a little more depth. 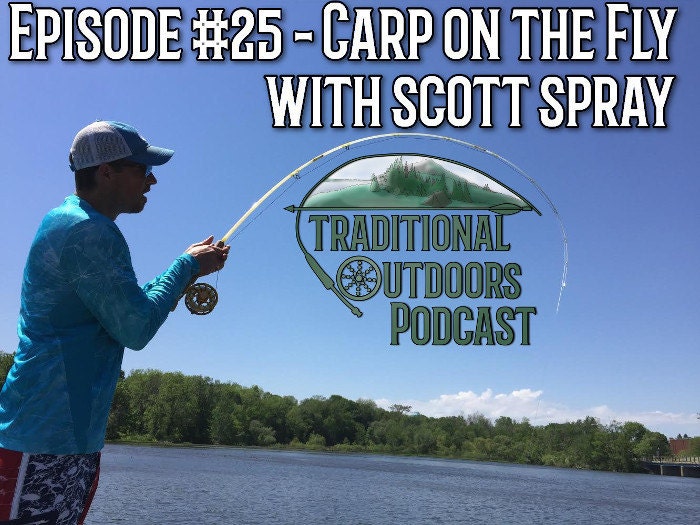 Next Post Click-pawl reels a quick explanation.
0 items in your cart