Originally finding Taylor on Instagram there was very little real world information out there to make a purchasing decision. What I had was mostly what seemed to be company sponsored reviews and Taylors PR campaign.

My experience started out on Kickstarter where I pledged for a Taylor Enigma reel and within a few months (Prior to the delivery of the Enigma) I pledged on Kickstarter for an Array SE Gold. The Enigma was delivered after a considerable delay due to “anodizing issues”. With the Enigma in hand I was worried that the quality of the Taylor Array was not going to be up to what I was used to with other companies that sold in a comparable price range. Even though the Enigma is not what this Blog post is about I thought it was pertinent to the post and the ultimate outcome. The Enigma appearance was not what was sold on the Kickstarter, the colors were dull, the drag knob, spool retainer and handle looked differently than the prototype. All of these things were not a big deal alone but along with the extreme slop of the spool on the frame, I listed the reel on Ebay for much cheaper than what I had paid.

The taste left in my mouth from the Enigma was less than palatable. So when I received the Array SE (after a delay because of a supplier shortage) I was a lot more pleased with the quality of the reel.

The reel is an amazing gold color and the porting initially reminded me of a few different Orvis reels that have been put out in the preceding few years. 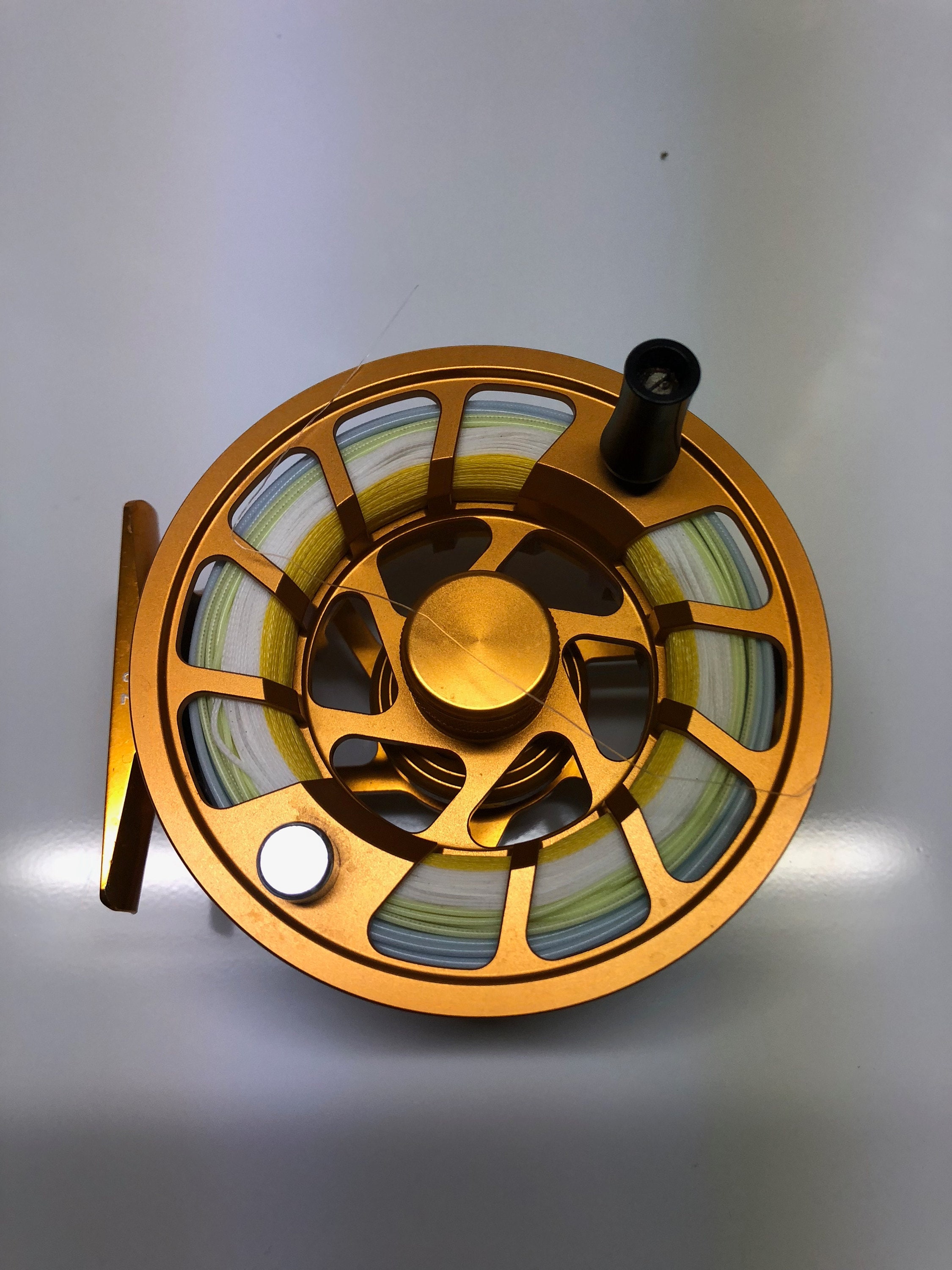 On the back side of the reel the drag knob is nicely etched with the Taylor logo along with “Taylor Reel” and “Array” on two of the frame spokes. The suggested weight rating “7-8” is etched on the spool side of the reel foot. The spool is attached to the frame with a threaded knurled cap that is retained once it is loose, so the chance of parts falling to the ground is little to none. If you have dexterity issues this spool will be easier than most to remove and reinstall due to the size of the retainer cap and the fact that it is retained with the spool. Once the spool is removed it reveals a sealed drag system that is quite adequate for most of the fresh water fish I have put it up against. This makes clean up quite easy and quick. 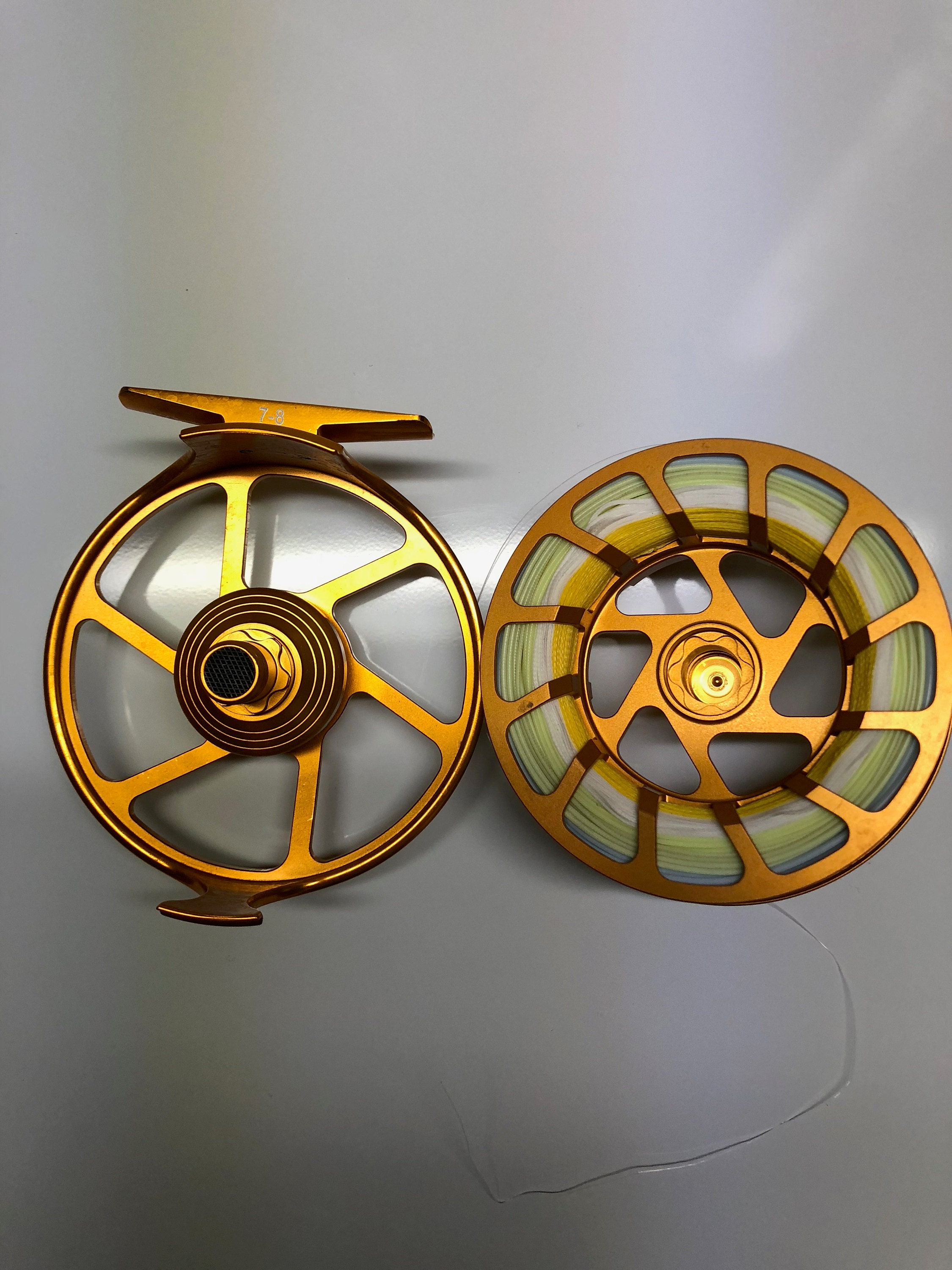 Remounting the spool and giving it a spin produces a barely audible click that is produced by a ball and detent contained within the frame of the reel, which is not visible unless you want to tear the reel apart (which I would not recommend).

The Good; This reel is very pretty and is true to what they said it was going to be. After a couple of years of use the reel shows very little wear and still functions the same as the day I bought it. The drag is very adequate, I am not going to hook it to a moped and try to burn it up as this is not a sponsored review and I am not being compensated for the words on this page. Taylor seems to make a nice reel.

The Bad; The Kickstarter deadlines have been very difficult for Taylor to estimate. The reel handle is VERY poorly shaped and almost seems to be mounted backward, it is flared on the spool side and tapered toward the distal side. When you have wet hands this design seems to be almost impossible to hang on to and seems to have not been thoroughly thought out, it almost feels too small for the 7-8 rating of the reel. The handle has slipped out of the grip of my fingers several times fighting fish and this alone has almost been a reason to sell the Array. Before I make a decision like that I am going to see if I can have a new handle made for it by my father who is a lathe master! I like an audible click so the quiet click of the intake and outtake is not a sexy thing to me. Although that seems to be the norm anymore so I have a tough time calling it a “bad” thing. 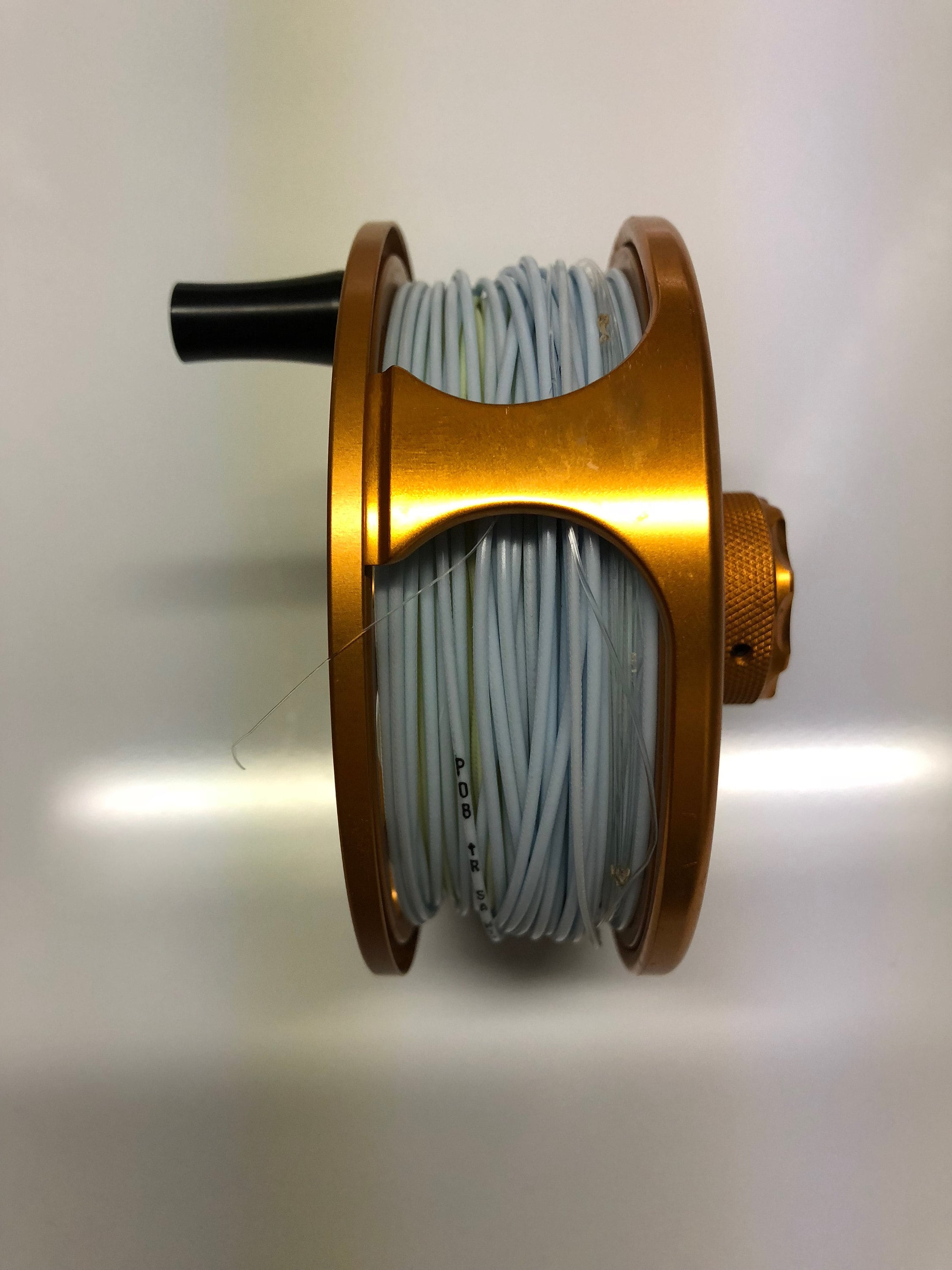 I don't think you will be dissapointed if you purchase the Array from Taylor. If they haven't already, they need to ditch the handle design. The reel is solid and has stopped many 5-12 pound carp dead in their tracks.

The views expressed in this blog are solely the opinion of S. Spray and are not paid for or supported by Taylor or any other entity. All items are bought and paid for by Scott and used on the water.

Previous Post Fly fishing and fly tying, what are the first few important steps to learning either.
Next Post My un-boxing review of the Danielsson Midge on Youtube
0 items in your cart