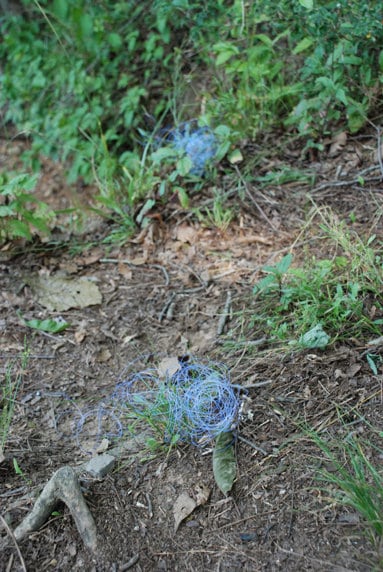 That is a question that I have been confronted with in my own mind quite often lately.

Most of my time is spent chasing warm water fish. Yet I have a trout plate on the front of my truck. Why? In my subconscious, do I feel that other fly fisherman will see my carp or bass plate and mistake me as a tackle fisherman?

So, what makes fly fishermen elitist? Is it the attitude? Is it the Catch and Release movement? Is it the perceived cost of the gear and accessories? Or is it the stream side interactions? Maybe fly fishing elitism is a perception that is created by social media or television.

When a tackle fishermen sees me streamside does he look at me and think "what a douche"? I know what I think about him, "I am going to have to clean up after this guy when he leaves". Right or wrong this is my perception. Take for instance my recent experience.

I visited a local river that I have not been to for a couple of years. The river runs along a pothole laden, two lane road for almost a quarter of a mile. A large parking area that can accommodate 7 to 10 cars (depending on how people park) is situated across the road and three single car parking areas dot the thin strip of land that separates the river from the road.

When I arrived, I parked in the large parking area, as I had almost every weekend, years ago. I was one of three cars parked and the only fisherman that I could see for the stretch of visible river.

As I paused streamside, I watched the water as to make an educated fly choice, fish were rising everywhere, with great consistency. I chose a dry fly, to give me time to survey the water more, even though I had not seen many in flight.

I stepped into the rushing water upstream of where I was seeing the most rises. As I waded to the "promise land", a jalopy of a car rolled up and parked in the first of the three single car parking areas, four people piled out of the car. Where they parked was just out of casting distance of where I stood, but I was visibly moving toward them.

Out of the back seat came two black spinning rods. Bogie one grabbed a rod and was baiting his hook as he headed toward me. As bogie one was closing fast the other three stood on the bank, stripped the line from the other rod and started relining it with mono. Throughout this process bogie one was casting his line right in the area I was currently fishing.

I had a choice to make, teach a few ignorant fishermen a lesson or live with the hand I had been dealt and fish on. I chose the latter, for obvious reasons... four vs one comes to mind.

I continued to fish this area and did quite well after the fish settled back in from being put down by the commotion. After a bit I moved to the opposite side of the stream and downriver of the group of fishermen. They were young, probably late teens early twenties. Presumably not well off, as that is how they presented themselves. I continued past them, probably putting their fish down for a few minutes (my own little victory) and did really well downstream.

So well in-fact that I had decided to return to the same stretch of river the very next night. I wanted to find a parking spot that Nicole could hang out in the truck and watch me fish, so I would avoid my normal parking area and looked for a riverside spot. As I pulled onto the two lane, pothole ridden road I saw a newer pickup parked in the same spot as the jalopy from the night before. As I passed the pickup, I saw a man with an eight or nine year old boy sitting in chairs fishing. I continued to the third riverside parking area and donned my fishing gear.

As I slipped into the water, well upstream of the fishing duo, I planned to wade down to just upstream of the duo and exit, then walk over and ask them how the fishing was going. Kids seem to think that fly fishing is pretty cool, and talking to them about it always makes me feel a little cooler than I actually am.

The water was busier this night with fisherman and kayaks. The fishing was not nearly as productive as the night before. After only three fish to hand and maybe twice as many takes, I started wading downriver a tad faster.

Before I could make it to the duo, they packed up and drove toward me. As they passed the tailgate was down and fishing gear was sitting on it. Which made me think that they were local or were going to be a lot less gear laden when they got home.

I walked, as planned to the duo's ex-fishing spot, now able to fish it all the way to the end and exit in the designated entry/exit spot where the truck had been parked.

Let's rewind to the night before. I try to make it a habit of picking up trash when I see it on the riverbanks. When I exited the river much further downstream than this night, I made it a point to walk through the parking spot of the jalopy expecting to pick up their spent fishing line, beer cans, empty wrappers and such. There was nothing! Nothing to pick up!

This night when I exited the river where the duo was sitting, I was stunned to see a beer can, fishing line, snack wrappers and receipts. As I walked back to the truck several things ran through my head. What a message this "role model" was sending to this young man, and that I probably looked like a fly douche carrying out someone else's trash from a common fishing area.

Is fly fishing elitist? Am I a fly douche?

In general, I make broad assumptions pointed at bait and tackle fishermen. It's okay to make some assumptions, without them a person's survival would be short lived because you would lack the intuition to remove or avoid certain situations. Even though this fact is not directly pointed at bait and tackle fishermen, it is an ingrained life skill and unavoidable. Often your instincts are right, trust them, but don't hold on to your assumption so tight that you are not willing to change your preformed perception of someone.

Pack out more than you packed in. It just feels good to do your little part.

Even though I haven't kept a fish in many, many years I really don't care if you do. If someone keeps a legal limit of legal trout it's ok, trust me, it's ok! I understand that it is our duty to protect our natural resources, but I see people on social media freaking out over someone with their finger in the gills of a stocker trout, that they kept and ate.

If you are going to turn them back, handle them with care. Increase survival rates, crimp the barb and "Keep Em' Wet".

Whatever gear someone fishes with, encourage them to be outside, even though you may have to help, and clean up after them. Hopefully your good actions will create good actions in them, actions crated in anger will precipitate anger. Walking into that group of fishermen and snatching their trash off the ground (if they had some) would have cemented their perception of my douchedom, and most likely earned me a black eye.

If doing these things makes me an elitist, I am fine with that. I will fight that perception with my actions, though I would just like to share the water with people that pick up after themselves, like the jalopy driving, tackle fisherman. I can deal with ignorance, far more than people that leave trash streamside.